Station 31 was dispatched to an Illegal burn on Lucia Riverbend Hwy. O/a B-317 found a small outbuilding on fire, crews extinguish the fire. Crews also informed the home owner of the laws of burning...
Read more »
MVA
Sun. May 3rd 2015 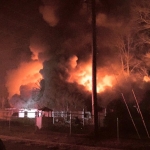 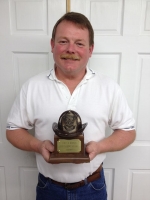 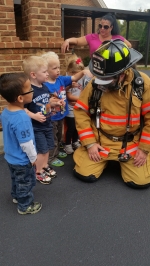 Our firefighters During Fire Prevention week showed the local Pre-School what a firefighter looks like dressed up. They also hit on several life saving tips hitting the main theme this year of "...
Read more »
Call History
Drowning/Body Recovery

On July 31, 2014 Station 31 was dispatched to Mt. Island Lake for a Possible Drowning.  QRV 31 along with Marine 31 responded reports were given that a Male subject had jump from the Mt. Island Bridge and never resurface.  Mt. Holly Fire Department, Gaston County Police Department, and Charlotte Fire Department were called to the scene to assist with locating the victim.  After several hours of unsuccessful attempts to located the victims body the search was called off and would continue the following morning.  On Friday August 1, 2014 at around 8, Crews reported back to Mt. Island Lake to continue the search for the victim, the victims body would be recovery a little after 5pm.

A special Thank You to everyone that assisted with the search.

Click the links below for News reports from Event 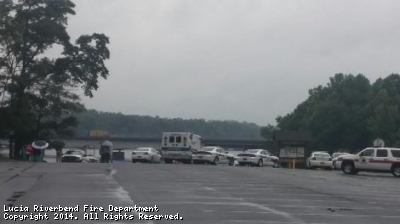 24 entries in the Call History

Station 31 was dispatched to an Illegal burn on Lucia Riverbend Hwy.  O/a B-317 found a small outbuilding on fire, crews extinguish the fire.  Crews also informed the home owner of the laws of burning, you are ONLY allowed to burn natural grown vegetation such as trees, grass, leaves, etc.

Station 31 was dispatched to a MVA PI @ Mt Island Hwy/Lucia Riverbend Hwy.  S-319 and E-311 responded on arrival crews found one car off the roadway heavy damage.  After investigation crews found one patient needing medical care.  Patient was treated and transported by EMS.

At 11:30 pm Community Fire Department (Station 32) was dispatched to an outside fire on Howie Drive. Approximately two minutes later the call was upgraded to a structure fire. Upon arrival Engine 32 checked on the scene with heavy fire and smoke showing.

Station 31 with multiply other departments responded to a Commercial Business Fire with East Lincoln Fire Department.  The fire would go to 9 alarms, Gaston County Tanker Task Force was also dispatched to assist with the fire.

Station 31 dispatched to assist East Lincoln Fire with a House fire.Engine 33 and Engine 35 arrived on scene to find a single story residential structure with fire venting through the roof on A/D corner. Crews stretched both 1.75" hose lines off of Engine 33 and fought the fire interior and exterior. FF noles and FF Mason made entry into structure by forcing the front door and conducted a primary search upon advancing the hose line. FF Rendleman and Captain Bishop extinguished the flames on...

Station 31 was dispatched to a MVA car overturned just before 10am on Dec 4th.  S319 and E311 responded to the incident, during en route crews were given updates that the vehicle was possibly on fire and someone trap.  S319 and E311 on arrival found a single car MVA car on it side and on fire.  S319 quickly advanced a 1 3/4 line for attack, the fire was quickly knocked down and crews confirmed one person 10-7.  Crews would remain on scene during the Police and Fire Investigat... 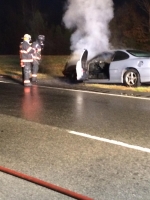 Station 31 was dispatched to a car fire on Hwy 16 near Mt. Island Lake.  Engine 311 on arrival found a single car working fire, crews quickly pulled a 1 3/4 attack line and made a quick knock down on the fire.

On November 28th Station 31 along with Mutual Aid Department were dispatched to a House Fire at 225 Oakmont Rd. Car 31 and Engine 311 on arrival found a single story residential structure working fire in the basement extending into the attic.  Engine 311 crew quickly advance a 1 3/4 line for fire attack in the basement, Car 31 requested a 2nd alarm for additional water supply and manpower.  A 2nd 1 3/4 line was pulled for fire attack in the attic.  Crews were pulled out of the hou...

Station 31 was Dispatched reference MVA Hwy 16 @ Lucia Riverbend Hwy updated were given that it was 4 cars involved and 1 was overturned.  S319 and E311 responded on arrival they found 4 vehicle accident one vehicle overturned all patient free.  Crews secure all vehicles and assisted EMS with patient care, a total of 12 patients involved 5 would being taken to hospital by EMS. 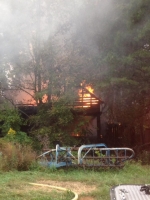 Station 31 was dispatched to response with the Tanker Task Force to a Barn Fire in Station 19 (Ranlo) district. T314 responded to the fire.

Station 31 was dispatched to a Single Car MVA on Sandy Ford Rd.  S319 responded and on arrival found one car off the road way one patient still inside.  S319 found that a female patient was complaining of neck and back pain, S319 assisted EMS with Patient Care.  Patient would be transported by EMS to hospital.

On July 31, 2014 Station 31 was dispatched to Mt. Island Lake for a Possible Drowning.  QRV 31 along with Marine 31 responded reports were given that a Male subject had jump from the Mt. Island Bridge and never resurface.  Mt. Holly Fire Department, Gaston County Police Department, and Charlotte Fire Department were called to the scene to assist with locating the victim.  After several hours of unsuccessful attempts to located the victims body the search was called off and would c...

Station 31 along with Station 34 (Mt Holly), Station 20 (Alexis), and Cooks Fire Dept (Meck Cont.) were dispatched to a Commercial Business Fire 175 Steam Plant Rd at the Duke Power Steam Plant-Mt Island.  Ladder 31 on arrival found smoke showing inside the building.  After further investigation Crews found that a AC unit belt had broken and started a small fire inside the unit on the 2nd floor.  Crews extinguished the fire and removed smoke from the building.

Body recovery at Mt. Island Lake, once drives hit the water the body was located and removed in about 32 minutes.  Outstanding job by everyone that responded to the incident. Click here for News coverage 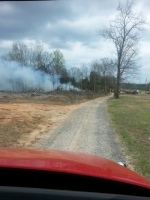 Station 31 was dispatched to assist Alexis Fire Department with a House Fire in there Lincoln County district.  Alexis Fire upon arrival found a fully involved Structure and a defensive operation was order.  Tanker 314 crew on arrival was assign to assist with fire control, salvage, and overhaul. 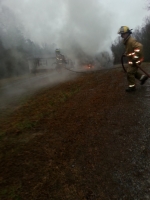 Station 31 was dispatched to a reported Vehicle Fire, E-311 responded and on arrival found one vehicle fully involved.  E-311 Crew quickly pulled a 1 3/4 line off the front bumper and began fire attack.  E-311 crew had a quick knock down on the fire and called for a control time within 10 min.

Station 31, 20, and 22 were dispatched to a Possible House fire on Stanley Lucia Road.  E-311 and T-314 responded and on arrival found a 2-story house with nothing showing.  Crews investigated and found no fire in the house.  After further investigation 31 crews found that a large tree had falling on power lines and had pulled the power ground from the house.

Station 31 was dispatched to Mountain Island Hwy at Sandy Ford Rd for a MVA.  S-319 on arrival found two vehicle accident moderate damage, all patient's free from vehicle.  All patient's were checked for injuries and all refused transport.

Crews were cleaning up from the Pin-in on Mountain Island Hwy/Hartis Way when Station 31 was dispatched to a MVA with Possible Injuries on Lucia Riverbend Hwy.  Crews were release from call Mountain Island Hwy/Hartis Way and Both S-319 and E-311 Responded to the MVA on Lucia Riverbend Hwy.  S-319 on arrival found One vehicle off the roadway, all patients free from vehicle.  S-319 crew provided Medical care to one patient, patient was transferred over to GEMS on there arr...

24 entries in the Call History

Copyright © 2006-2021. YourFirstDue Inc. All Rights Reserved. Designated trademarks and brands are the property of their respective owners. Content on this web site is supplied by Lucia Riverbend Fire Department. YourFirstDue Inc. cannot be held responsible or liable for any content, text, pictures, or any other media found on this web site. Maintained by the members and staff of Lucia Riverbend Fire Department.
Management Login
Powered by